The cleaning process addresses the three main problems of fuel contamination: water, solid particulates and microbial growth (known as the Diesel Bug). The polishing machine we use has a number of elements that include a powerful pump, mechanical filters and a centrifuge to help separate the contaminant from the fuel. It operates at a high speed and is self-contained within a housing. The cleaned fuel is returned to the tank. 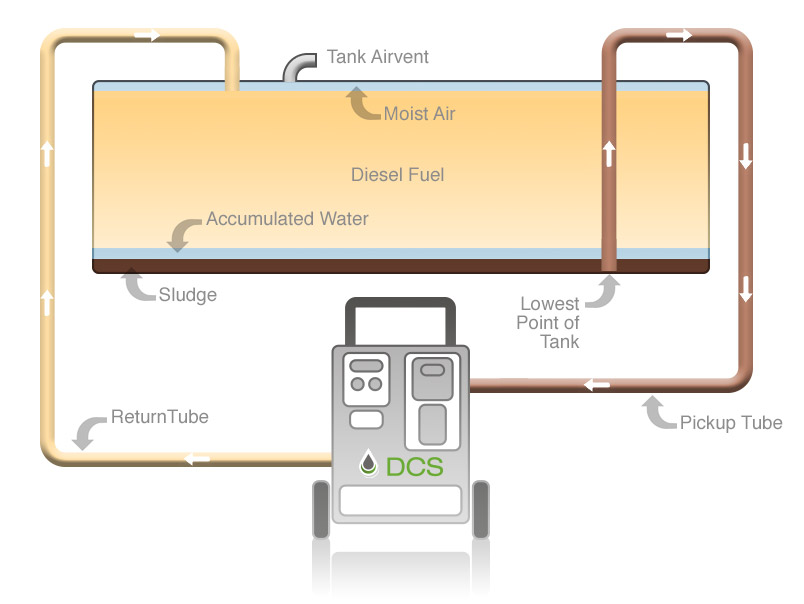 Any sludge that may have settled at the bottom of the tank is broken down and filtered out and Biofilms that can form on the tank surfaces are removed. We recommend a fuel additive is put into the fuel after at least every second refuel and that fuel polishing is carried out annually as part of an ongoing maintenance program.

How we use the Fuel Additive

In many cases we add a fuel additive early in the polishing process, which can help separate the molecules of fuel from the contaminant. Once the process is complete and all the conditioned fuel is back in, the fuel will be polished and the tanks will be clean. We can then add more a biocide additive to maintain the protection. There are a number of additives available and they all have varying benefits. They are aimed at preventing fungal growth and the sort of bacterial build-up which can lead to sludge particles which will block filters.

Once complete, we certify that your tanks are clean and your fuel meets ISO 4406 and EN590 standards set by the Directive 2009/30/EC

EN 590 is a standard published by the European Committee for Standardisation that describes the physical properties that all automotive diesel fuel must meet if it is to be sold in the European Union and several other European countries. Based on 98/70/EG it allows the blending of up to 7% biodiesel with 'conventional' diesel — a 7:93 mix.

ISO 4406:1999 is the internationally recognised method of quoting the solid particulate count in a fuel sample. It is also referred to as the ISO cleanliness code. For engines designed to achieve Euro 2, 3, 4 and 5 emission standards, clean fuel is important. For diesel to be recognised as ‘clean’ the fuel must contain less than 200ppm of dissolved water (as indicated by EN 590)